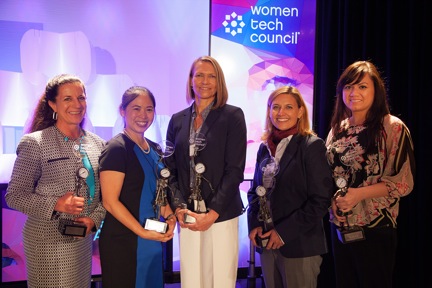 Women Tech Council just celebrated its 7th Annual Women Tech Awards. To date, 77 women have been recognized through this powerful program, thanks to our community of 2,000+ women and men who support our programs. The Women Tech Awards has brought the tech community together for 7 years now, with over 700 attending this most recent event. Now that we have a sense of our community, it’s interesting to look at what happens to the Finalists after they are recognized.

With six full years of Finalist data, I was able to look at the career movement of our Finalists after they had been named a Finalist. First, I grouped Finalists by award year to see how many of the Finalists each year had had at least one career move since being named a Finalist. Then I also calculated the number of months it took for them to make this first move.

The chart below is grouped by Finalist year (starting in 2008, up to 2013). The blue bar shows that in the 2008 group, 40% of its Finalists have had at least one career move since being named a Finalist. The red bar shows an average of 42 months for those Finalists in 2008 group that did make a move to do so (almost 3 ½ years).